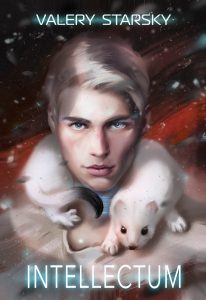 They say God created the Earth in six days. Highly advanced invaders, calling themselves Admins, destroyed Earth’s civilization and part of its biosphere in a single day.
People had always considered their minerals to be the most valuable material on Earth. They quickly learned how wrong they’d been. People turned out to be the most valuable material, or rather, the substance that could be produced from them.
Intellectum was a liquid so potent that a drop of it could bestow any creature or thing with sentience. It could make all sorts of objects smart, strong and infuse them with magic.
The Admins gave the three hundred million survivors a slim chance to improve their lot in life through the Global Game. Though the Earthlings were supposed to breed in special farms in order to produce more Intellectum, at least they hadn’t been deprived of their right to fight back.

What Inspired You to Write Your Book?
I'm a long-time fan of Fantasy, Science Fiction books, and video games. Discovering the GameLit (LitRPG) genre opened up a whole new world that allowed for the combination of game elements and a fantasy setting in book form. That inspired my writing.

How Did You Come up With Your Characters?
I came up with my main character as an ordinary guy who faced difficulties. This is the story of turning Alex into a hero that won't be easy.