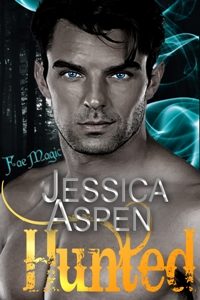 Killing her is his mission.
Hers is survival.
Neither of them expects love…

Swept away to the land of faery, Trina MacElvy’s falling in love with the enemy—and the one thing that might save her is the one thing she never thought she’d need…true love’s kiss.

As Huntsman, the last thing Logan expects is to fail in his mission. But one sight of the witch he’s been sent to kill changes everything. Now, instead of riding to kill Trina, he’s riding to save her…

An evil queen, a dangerous man, and a witch, tangled together in a tale of Snow White.

Immerse yourself in Jessica Aspen’s fast-paced fantasy romance…clever, sexy, and just a little on the dark side. Download HUNTED today.

What Inspired You to Write Your Book?
I've loved both Urban Fantasy and Romance for so long, that I wanted to combine the two into one series. Hunted and the Fae Magic series do just that. For me it was like taking Jim Butcher, swirling in a bit of Tolkein, and then adding Romance!

How Did You Come up With Your Characters?
This book is a twisted fairy tale of Snow White, so I needed a heroine who has Snow Whites characteristics: loyal but maybe a bit naive. Trina has a lot to learn—she's not one of those insta-heroines who is already super confident and strong. She has to grow.
When it came to her love interest, I wanted the huntsman to be the hero of the story. I had to wonder—what would drive a man to betray his queen? I came up with Logan: who's been torn between two warring factions of fae his entire life, and whose loyalty isn't to the queen, but to his family and to the queen's rebellious son.

Links to Purchase eBooks
Link To Buy Hunted On Amazon