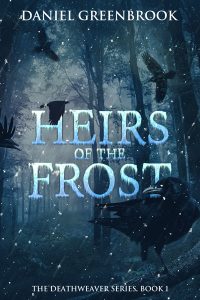 The Hybrids stand on the brink of extinction. Each day they struggle for survival and fight tooth and nail against annihilation, but they are alone. Most of the world doesn’t know of them. Those who do are just as likely to help them as to call them an abomination, an unholy blend of human and elven, of Water and Earth. Half-elves. There are only a few who refuse to accept this hollow war and dream of something greater. Ralael is one of them, a young Hybrid with big dreams and an iron will, and when two elves show up at their gates with an offer from their king he defies the will of his entire community in pursuit of a chance to be heard.

But the Hybrids are not the only ones who deal with such hardship.. Fifty elemental cycles after the Withdrawal, the Ice Elves are turning restless. To prevent the unrest from spreading, their king is forced to take extreme measures to quell the turmoil, but will in turn be compelled to protect himself against those who would harm him — and those close to him. All of his relations are thus sent away from the crown city in the hands of capable protectors, except for one…

The circumstances are not an ally of either party. Before the end, everyone will have to make a choice, Ralael included. Does his mission truly come before everything else? What weighs more on the elusive scale of conscience? His kind’s future, or the life of a stranger?

Heirs of the Frost explores the northern forests of the land of Thessian, where the ice elves live: sensitive and righteous, they feel love and hatred stronger than any other people in their world.

What Inspired You to Write Your Book?
When the initial, raw idea for the world of Thessian came to be it was tied to my interest in the psychology of personality. The idea that would anchor this interest into a fantasy story was the theme of the Elements: each one has its own race and that race has its own traits that mirror that element. Now the title "Heirs of the Frost" should be clear: it deals with an aspect of the Water, in this case the Ice Elves.
This makes up the equilibrium, which si disrupted by the fact that the Hybrids exist. The story deals with acceptance, at its core: each elf we find reacts differently to the supposedly unnatural nature of the Hybrids.
Or, as the elves call them, Hyxaenn.

How Did You Come up With Your Characters?
Right at the beginning I knew I needed a strong character for a protagonist, someone that would take on responsibilities and that steered clear of both the Reluctant Hero and Chosen One trope. Ralael has a strong conscience and an iron will, and strikes a balance between pragmatism and starry-eyed idealism.
Alongside him, I wanted a character that would contradict and thus reinforce his traits. Rha'nall is just that. She's every bit as optimistic as Ralael is pessimistic, innocent in the face of his cynicism and so on… Months after writing the story I noticed where the initial input for the character had come from: people who have played Bioshock Infinite may sometimes see faint glimpses of Elizabeth Comstock in her character.

Book Sample
From the first chapter, A Cold Welcome