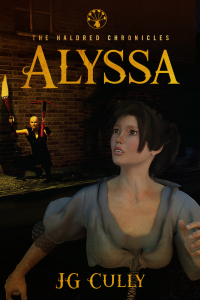 “They may slay my mortal body, but I am not so easily defeated. Time is on my side, and I will spend it well.”

Alyssa is the last vampire, changed by Igor Regorash himself before his permanent death. With this transformation comes power, but also a terrible loneliness that makes Alyssa long to be human again.

Victoria Haldred is a Council of Peace investigator, charged with maintaining order in a post-war world. Her days are spent combatting murder, assassination, bombings, and blackmail, not to mention dirty politics and double-dealing.

When a local drunk comes down with a bad case of dead, Alyssa and Victoria are set on a collision course that will change their lives (undead as Alyssa’s may be) forever. A dark entity becomes dangerously fixated on the two women. With no one to trust, and an inescapable power looming, Alyssa and Victoria must combine their strengths if they hope to survive a world turned sinister.

What Inspired You to Write Your Book?
Nanowrimo in 2012, during a challenge to come up with an original fantasy story.

How Did You Come up With Your Characters?
Alyssa was based on vampire stereotypes turned on their head. She's not ancient, she knows little of her own abilities and she doesn't want to kill anyone! Victoria was based on several of my friends all rolled into one, with a dash of detective flair.

Book Sample
The large figure stumbled, walking in a zig-zag across the path. On either side of the path were metal spikes. Old defensive obstacles left over from the Six Nations War, they pointed upward and inward, still sharp, still deadly.
He groaned, his hands scratching an itch upon his neck. He shook his head, grunting. “Stupid girl.” He growled. “Hit my head…” He lost his footing and fell heavily onto the track. With a grunt, he heaved himself up again. Two shadows loomed over him in the waxing dawn. “Yes, he will do nicely.” T he figure looked up at the voice and swore; he met with cloaked blackness that seemed impossibly tall. “Wha’s tha’?” he slurred, but then quite suddenly felt his body being lifted up. He tried to cry out, but no sound came.
“As you will, Leader,” said another voice from beside the first, the glint of metal visible beneath a hood. Held a few feet off the ground, floating in mid-air, the man was spun and moved over the edge of the path. He tried to struggle but his limbs would not move. His head was pulled back by some invisible force, exposing his neck. Slowly, he was lowered. He tried to struggle again, more urgently now, for he found himself being lowered onto one of the spikes. “Do not worry,” came the first voice again, “for you have set in motion events of great import.”
“As the Leader wills it,” the second voice concurred, “so it shall be.”
The forces holding him abruptly disappeared, and the fat man fell hard.