You are here: Home / Alternative History / From His Perspective by Lisa Keeble 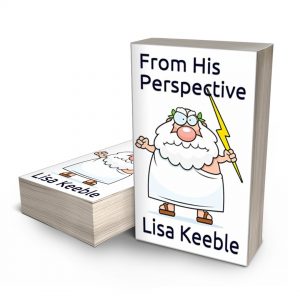 You might think you know human history, but you’ve never viewed it From His Perspective…..you like a good laugh, right?

In the beginning, there was darkness and The Boss liked the darkness. He’d spent years creating the darkness. He was proud of the darkness. Unfortunately, his assistant Norbert liked to snack while working and had a very sensitive nose. Had he not been in charge of monitoring the black holes this may not have been a problem but, as it was, a violent sneeze launched a single biscuit crumb into the darkness, and it was no more. A huge explosion rocked the Factory (better known to us as Planet Earth) and, for The Boss and Norbert, the real work began – they had to deal with life.
Life, as they found out, had an awful habit of not staying true to their designs, however carefully they drew up the blueprints. Suddenly, there were fish who wanted to live on the land, a dinosaur who went around killing everything it met, and then, of course, there was man — the Boss’ most distinguished and regrettable invention.
He and Norbert watch from their viewing platform as the human race blunders its way through history and do what they can to ensure that the entire species doesn’t render itself extinct. They watch as cavemen tackle woolly mammoths in order to fill their larders and provide next season’s wardrobe and quickly regret introducing them to fire. When tyrants rise up against their fellow man in Ancient Egypt, rivers run red with blood and plagues of frogs are visited on the Egyptians as the Boss and Norbert try to distract the evil doers from their purpose. Unfortunately, their intervention does nothing more than interrupt the Egyptian’s laundry schedule and promote an increase in sales of sandal cleaner. The Boss has decades of sinus infections and soot covered sandals as Henry VIII and Bloody Mary take power and decide that burning their fellow humans is a perfectly acceptable way to get their point across. Wars, the industrial revolution, slavery and empire building – all it does for Norbert and his Boss is push up their overtime budget, create more paperwork and cause them to stress eat chocolate biscuits. Not only that but the human’s blatant disregard for their habitat means braving the really long ladders to make repairs to the ozone layer.
After millennia of aggravation from the humans and failed attempts to get them to be nice to each other, The Boss decides to answer the question that human beings have been asking themselves since the dawn of time – why am I here?

What Inspired You to Write Your Book?
The idea for the book came to me whilst I was in the shower one day, as good ideas are often want to do. I wondered what the creator of the universe would think if he could see what the human race was up to – I came to the conclusion that he'd be pretty miffed and the story developed from there.

How Did You Come up With Your Characters?
The character of The Boss was easy. He was the creator of the universe so it wasn't hard to picture him – scruffy beard, slightly tubby, proclivity for chocolate biscuits. From there I figured that he would need a personal assistant to help him manage The Factory (better known to us as Planet Earth) and Norbert was born. After that, the other characters really just found me.

The Boss was sitting in quiet contemplation surveying the vast expanse of nothingness beneath him. It was a very dense kind of nothingness and had been several millennia in the making but, finally, it was almost ready for the next part of his plan. As he ruminated on the blueprints piled up on his desk, he took a tentative sip of piping hot tea before reaching over to grab a pencil from a tin, which was entirely black except for a single, brilliant white stone on its lid. It was the tin that had given him his latest idea and, although he was not given to introspection, he had to admit he was feeling pretty proud of himself. After having made a few minor design alterations, he put down his pencil and reached once again for his cup of tea. Leaning back in his chair, he put his feet on the edge of his desk and closed his eyes, a small, satisfied smile on his face. Several moments later a blast, cosmological in its enormity, shook the walls of the office and The Boss found himself lying on the floor in a tangle of tea covered robes.

“What the bloody hell was that??” He scrambled to his feet, lost a few moments trying to locate his left sandal but then he was off at a run, determined to find the source of the noise. The Boss did not have, as has been regularly postulated, a handsome benevolent face and a long flowing white beard. In fact, his face was often scowling, he was a bit podgy as a result of a proclivity for chocolate biscuits and, although he did have a beard it was short and a little scruffy. However, what he did have was an amazing turn of speed and extremely accurate hearing.

“oops!” Followed by the subtle sound of slippers departing at top speed was enough for him to guess the cause of the explosion and he set off in search of his PA at an ungainly gallop. He usually had a certain grace but running whilst trying to create a soothing breeze around his nether regions, with tea-drenched robes was no mean feat. The object of his ire came into view and he put on a final burst of speed before launching himself at his PA and tackling him to the floor of one of the many viewing platforms that surrounded the immense black space.

“Norbert, what have you done to my Factory?” The Boss was holding a short, angular man at arm’s length and was dangling him over the edge of the railing that was designed to stop people falling off the viewing platform and onto the Factory floor.

“Boss, calm down, you’ll do yourself a mischief carrying on like that.” The nasally voice was pleading. Although he was gripping his Boss’ muscular arms Norbert was increasingly aware that, if he let go, the only thing between him and extinction was his underpants elastic. Being dangled over a precipice by your pants is an unpleasant experience and Norbert was not sure if he was more worried about falling or the damage being done to his tenders by an epic wedgy. He took a deep, if shaky breath and arranged his normally untidy features into, what he hoped, was an appealing grin.

“Boss, please, if you’ll just let me down, I can explain…” He felt himself drop another couple of inches and his eyes watered.

“No, no, no. Not down, not down. Boss, I’m begging you. Up!” The final word was little more than a squeak as he clenched his buttocks as tight as possible in an effort to stop his pants from disemboweling him. He was immensely relieved when the Big Man relented and hauled him back over the railing where he collapsed in a heap. He fought to gain control of his shaking legs whilst, simultaneously, trying to extricate his pants from places that he doubted would ever be the same again.