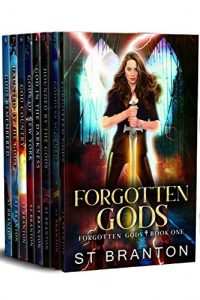 The gods are real…and they want their world back.

Thousands of years ago, ancient deities fought a civil war that nearly destroyed the earth. They were defeated by a great warrior—and banished to spend eternity beyond the reach of the humans who once served them.

Their war is raging once again.

And once again, it will require a great hero to save humanity.

Unfortunately for humanity, I’m that hero.

My name is Vic Stratton. I’m no saint, but I’m the best chance we’ve got at surviving the chaos about to be unleashed. But hey, at least I have my good looks, a quick tongue, and the sword of the gods on my side.

And I’m going to need it. Because when the gods return, all hell will break loose.

Buy the book, and follow the author on social media:
Get This Fantasy Book From Amazon.

Outside of reading and writing, he loves to spend time with his family in the woods and wilds or the city streets.

When he’s not reading, writing, or binge-watching 90s era cartoons, he debates grammar rules with his wife (he mostly loses those fights), plays board games with his friends (he often wins those fights), and contemplates the meaning of life with his cat named Cat (which is never a fight at all since Cat is a pacifist). Lee also co-hosts the Part-Time Writers Podcast with his friend and writing partner C.M. Raymond.

He currently resides outside of Pittsburgh, PA and plans to stay there as long as the great city will put up with him.