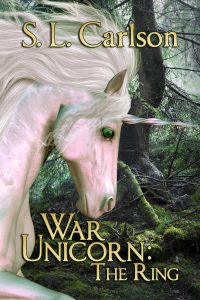 Aldric is content working in his family’s apple orchard—or as content as a fourteen-year-old-boy can be doing chores and dreaming up new magic—when he digs up an antique ring and releases a rude spell-bound unicorn. She claims she belongs to the king, but after her long imprisonment, she can’t tell Aldric which king that might be. Aldric promises to take her to the capital, and suddenly a simple three-day trip becomes an adventure.

War is building on his country’s borders, and even with the help of Aldric’s new friend Iggy, and Gwen, the general’s daughter, it’s going to take all the military sword training, courage, and magic Aldric has to find the unicorn’s rightful king. Promises will be made, the bonds of family and friendship will be tested, with a war which changes everything.

Can an apple farmer and one rude war unicorn save the country from the approaching enemy?