You are here: Home / Fantasy / Featured Book: The Stone of the Tenth Realm by Eva Gordon 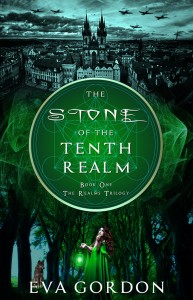