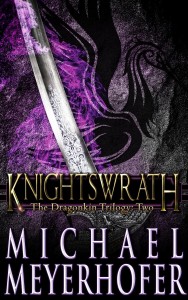 In the highly anticipated sequel to the award-winning novel, Wytchfire, Rowen Locke has finally achieved his dream of becoming a Knight of the Crane, and he now bears Knightswrath, the legendary sword of Fâyu Jinn. But the land remains torn, and though Rowen suffers doubts, he would see it healed. His knightly order is not what it seems, though, and allies remain thin. When Rowen and his friends seek an alliance with the forest-dwelling Sylvs, a tangle of events results in a midnight duel that teaches Rowen a dangerous lesson and leaves him with a new companion of uncertain loyalties.

The sadistic Dhargots still threaten the kingdoms, but another menace lurks in the shadows, playing a game none can see. As Rowen struggles to prove his worth—to his allies and to himself—chaos raises its hand to strike. A price must be paid, and not even the wielder of Knightswrath will remain untouched.