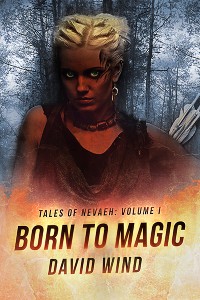 Welcome to Nevaeh: a world where technology no longer exists, but Magic does.

In what was once the beauty of America, catastrophically decimated three thousand years before in the terrorist wars, and changed by nuclear radiation, the descendants of the surviving peoples of America live in a world of ritual and magic where ten dominions battle a threatening dark power.

In Nevaeh, where men are blessed with great strength and women have both strength and psychic abilities, one person has been chosen to be Nevaeh’s savior, Areenna of Freemorn. At eighteen, the only daughter of the King of Freemorn, Areenna is called to The Island, a place where all women of psychic power must go, but from where only some return.

Areenna, whose psychic abilities—her magic—are already stronger than most. is accompanied by Mikaal, the son of the High King of Nevaeh. The two must undertake a perilous journey to The Island, a place of great power, in an effort to save Nevaeh from the oncoming darkness. But, these dark forces will do everything in their power to stop Areenna from reaching her destination. Their journey is filled with unimaginable dangers as they cross Nevaeh’s dominions, and fight their way to what will either claim both their lives or give them the ability to save their world.

Buy Born To Magic, Tales of Nevaeh, Volume I Here