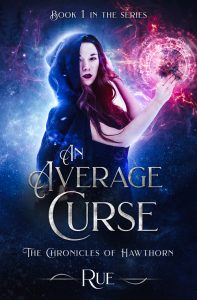 FREE for 5 days only!

Her world is in peril. Magick is her only hope. As of this morning, she still can’t cast a single spell.

On an island hidden from the rest of the world, Flynn Hawthorn, the ninth daughter of the ninth daughter, lives under a curse. In a land filled with magick, Flynn is forced to live her life as a Watcher—born into magick, but unable to wield it.

Her birth fulfills an ancient prophecy that’s waited nine generations to be satisfied. Flynn must reunite the separated halves of the Book of Shadow and Light to restore balance to her world.

Dark forces oppose her purpose and as the threat from the Shadow Coven of Southeil touches her shores for the first time in generations, Flynn must pretend—with the help of her best friend Hazel—that she actually has magick. Hazel would do anything for Flynn, but the game they are playing may cost them their lives…

Buy “An Average Curse” to join the adventure today!

Buy An Average Curse: A Tale of Friendship and Magic (The Chronicles of Hawthorn, Book 1) Here