You are here: Home / Fantasy / Escape the Deep by ST Branton 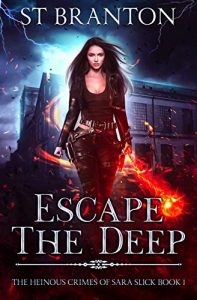 Escape the Deep by ST Branton

I was innocent, and they called me a monster.

Maybe a monster is exactly what the earth needs. ​

My name is Sara Slick, and I was an average teenager. I worked hard. Followed the rules. Took care of my family. But normal dissolved the night that the hidden world of The Far showed up to accuse my dad of heinous crimes against the magical community.

To protect the ones I loved, I took the blame and the sentence of ten lifetimes in The Deep.

No human had ever been sent to this paranormal prison.

They couldn’t have been more wrong.

I survived by becoming the kind of human the magical world feared. Now, a decade later, I need to escape from hell before the home I sacrificed everything for meets its end at the hands of a maniacal, master wizard and his army of fanatics.

What’s one army against the heinous Sara Slick?

Escape the Deep is a fast-paced urban fantasy that pits the power of the innocent against the influence of the cruel. Filled with magic, monsters, and one badass human, The Heinous Crimes of Sara Slick will satisfy your need for action, adventure, and the delightfully absurd.

CM Raymond calls a river valley of Western Pennsylvania home. Outside of reading and writing, he loves to spend time with his family in the woods and wilds or the city streets.