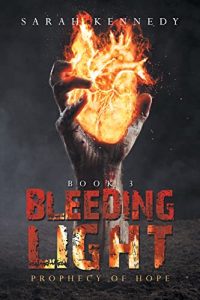 In the latest volume of the award-winning Prophecy of Hope Saga, an empty throne, fallen crown and broke scepter are all that remains of the great Empire of Light. From Nudhug to Armahad, the marked bones of the Caladrius kings have all been stripped of their promise, and crumbled into dust. But one remains. the despotic heir, Liacin Caladrius, has given himself wholly to Sgarrwrath, the ancient evil cursed long ago to formless darkness, for promises of power beyond that of any man before. Yet Sgarrwrath cares little for the man held in his thrall, he desires only to wield Liacin and the bloodline he embodies. A bloodline tied to a prophecy as old time. Sgarrwrath has spent millenia trying to overcome his curse, one stolen piece of life at a time, and the prophecy forever telling his doom. His ultimate prize is none other than the one who cursed him so long ago, Mhorag, the Living Flame, one of the Everliving. With Liacin and his bloodline of prophecy, Sgarrwrath hovers upon the brink of world-wide dominion. Yet when flame falls from the sky and the Markless Son bears the Golden Brand, Sgarrwrath finds himself facing his highest desire and his greatest fear, as all who behold the signs know that the true Promised King has come but not in the way they expect. As the prophecy has long foretold, hope is divided like the flame. By some twist of fate, Mhorag has come down into a world of darkness and has taken an unexpected form. The form of a child, robed not in the glorious flame of the Everliving but in vulnerable, human flesh, in the womb of Sian Seela. Why? That is the question that plagues Sgarrwrath as together he and Liacin seek to claim the Promised, setting their focus upon the infant conceived by mysterious circumstances. In some ways, Mhorag seems diminished and yet Sgarrwrath can still sense too much life, power– everything he has ever desired and more, and suddenly Mhorag appears to be in reach. Sgarrwrath seeks to take the child before he can be born upon the earth but something stands in his way. Both a prophecy and a curse. Others also look to the child. To protect him. To serve him. To worship him. Soon, the battle lines of a timeless war are redrawn, this time upon the earth, held in the terrible grip of Sgarrwrath’s own dark soul.

Targeted Age Group:: Teens and up

What Inspired You to Write Your Book?
Bleeding Light is a continuation of a series. The series came about from characters I have been writing about for most of my life. I started writing them as a child during a particularly difficult season in my family as we faced my brother Isaac's drug addiction. The series, in its published form, came out of that when following Isaac's sudden death in what has become known as our country's ongoing Opioid Crisis, I wrote my first novel, Sgarrwrath, Prequel to the Prophecy of Hope, as part of my grieving process. Sgarrwrath is a character I never named as a child. He was there in the darkness and pain but he never found his voice until after Isaac's death, and without Sgarrwrath there would be no series. Bleeding Light, Prophecy of Hope Book 3 is simply the next part of the planned series of interconnected stories.

How Did You Come up With Your Characters?
It started simply in the fertile imagination of a child. It grew from there as a child was forced to deal with things even grownups struggled to comprehend and survive. My characters were a form of relief. Protection from the trauma of a family desperately trying to cope with the effects of drug addiction with no help or support. Writing these characters was a form of survival. From there, writing these characters was a healing process. Now, these characters are like old friends whom I simply cannot get enough of, not until their stories are told in full.