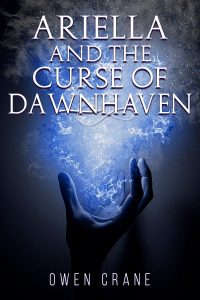 Ariella Lightharbour is heir to the crown with a nation at her feet but knows she’s meant for more. Forsaking her throne she chooses to become a Guardian. As she embarks on The Journey she must find the courage within herself to battle the deadly Ghost Raiders that murdered her father, discover the identity of the elusive shadow and fight to end the curse that threatens to overwhelm the land.

What Inspired You to Write Your Book?
My children. I wanted to write stories for them, that would inspire them, encourage them and make them smile. My first child was a girl, and as I was thinking about the stories I loved from my childhood, I realised that there were not a lot of female characters. That is what inspired me to have Ariella as the main character in my book.

How Did You Come up With Your Characters?
In many ways, the characters in the book are borrowed from people I've met in my life. The good, the bad and the ugly. In a few cases, the characters are people that I wanted in my life when I was growing up. I imagined what it would be like to have a sister as I have two older brothers and always wanted an older sister.

Book Sample
The roar of the crowd behind the curtain filled Ariella’s ears, making her head swim with the fears she’d been nursing for the past week. She may not have been able to see their faces, but the vibrations she could feel through the floorboards confirmed that the whole of Lightharbour was gathered on the other side of the plush hanging fabric. Nerves had already got the better of her in the morning, and she’d been sick twice, narrowly avoiding detection from her mother.
This is it Ari, no going back now. In a few moments, the whole city will know.
She tried to appear calm but her stomach was churning and her palms were clammy with sweat. Her mother was standing next to her, a picture of serenity waiting patiently to be welcomed onto the stage.
“Are you all right dear?”
Ariella smiled weakly.
“Do you think you’ll recognise any of them? They’ll be the same age as you,” her mother smiled. “Fifteen seems much too young to begin the Journey to become a Guardian. They must be so nervous, waiting out there for the announcement.”
You think they’re nervous? You have no idea.
The crowd beyond the curtain was momentarily silenced by the blast of a dozen trumpets sounding out across the city square, announcing the royal entrance.
Ariella’s mother turned and smiled. “It’s time,” she whispered as she took her hand and the curtain in front of them parted.
I think I’m going to be sick.
Beyond the curtain, Ariella could see the mass of people cheering as her mother led her onto the stage. She tried to smile and wave, but she was starting to feel dizzy.
Thankfully her mother was fully absorbed in the moment and did not notice her daughter’s distress. She led Ariella to the two grand chairs that had been placed on the stage for them. The crowd continued to cheer until the trumpets let out a long blast. From the far side of the stage stepped a tall, handsome man with a broad smile. His skin was dark, a stunning contrast to his bright silk clothes. He walked with natural confidence, approaching Ariella and her mother and bowing low.
“Your Majesty,” he began. “May I begin the Announcement?”
Her mother paused for a moment then smiled, “You may, Hakeem.” Hakeem bowed again and flashed a glance at Ariella.
What was that? Does he know? How could he know? The test is secret, no one knows. Is there anything that goes on in this city that Hakeem doesn’t know about?
Hakeem walked to the front of the stage, the crowd silent as if they were collectively holding their breath. He paused, allowing the tension to build. After what seemed like hours to Ariella, Hakeem reached inside his jacket and, with a flourish, withdrew a thin scroll bound with green silk. He took his time untying the silk and unrolling the scroll. The crowd seemed to lean in, waiting.
Hakeem’s voice rang out clear and strong across the city square. “By decree of the Guardians of Dawnhaven and the royal household of Lightharbour I hereby make this announcement: the ten who have been chosen to begin the Journey are…”
Ariella’s heart began to race. She sat on her hands so nobody would notice them shaking. Hakeem slowly read out the names, and one by one, the crowd roared their approval as those chosen made their way to the stage.
Seven names were called, then eight, then nine. Ariella held her breath, trying to concentrate on what Hakeem was saying, desperately hoping she could keep it together.
“The final person to be announced is…Ariella Lightharbour.”
Silence fell over the crowd. Ariella felt her mother stiffen as she turned slowly to face her. Hakeem was looking at her, his expression impassive.
Ariella rose to her feet and walked to stand with the other nine. Still, no one spoke, nothing breaking the silence. Then, painfully slowly, the crowd broke into applause. It rippled through the square building to a crescendo, shouts of approval finally filling Ariella’s ears. She smiled weakly and managed a hesitant wave before casting a glance over her shoulder towards her mother. Her face was like marble, unreadable except for her eyes. Her eyes were burning with anger.