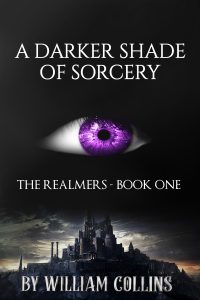 For fans of Harry Potter, Buffy the Vampire Slayer and the Dresden Files.

Evan Umbra is the newest Venator to enter Veneseron, the school for demon hunters, only demons are the ones hunting him.

A Venator is a wizard, a spy and a demon hunter rolled into one. They’re taught how to wield their sorcery and enchanted weaponry by orcs, elfpires and aliens alike. Their missions range from battling monsters and saving countless lives in the multiple worlds, to wrangling killer unicorns and calming down drunken yetis. Being a Venator is perilous and every new mission could be their last.

Whilst learning how to manipulate the elements, summon magical creatures and shoot Spellzookas, Evan encounters a dangerous rival and meets a girl who makes him feel nauseous; but in a good way. He makes the first friends he’s ever had in the carefree Jed and the reckless Brooke. Whilst Jed gets on the wrong side of a rival Venator, Brooke finds herself falling for the enigmatic demon hunter who brought her to Veneseron, not knowing he isn’t quite human. But it soon becomes apparent that Evan is more than just a Venator. Everyone wants to kill or capture him, from demons to Dark-Venators and even people he’s supposed to be able to trust.

Targeted Age Group:: 11 and above

What Inspired You to Write Your Book?
After my love of reading turned into a love of writing, this particular story just yearned to be written. The idea of a magic school for demon hunters fascinated me and it's definitely a school I'd want to attend myself.

How Did You Come up With Your Characters?
Most of them sprang up organically. I'd plan out how the characters react but when it came to dialogue they seemed to come up with the words themselves.

Book Sample
The three hunters stood silent and sentinel, watching from the shadows for the one they sought. The writhing mass of humanity jostled one another in their hurry to enter the warehouse.
“Her,” Lok said, pointing at a provocatively dressed girl as he exhaled purple smoke.
Arantay smiled and replied, his voice velvet soft, “No, Lok. As much as you would want it to be, no.”
“Perhaps she’s already inside?” Tyrell said.
“Let us find out,” Arantay rasped, his eyes flashing crimson.

The deafening music pumped in time to the rhythm of her heart. Green, red, yellow and blue lights shone and flashed all around, illuminating people one moment, throwing them into darkness the next.
Brooke danced wildly to the techno music booming through the warehouse. Her friends were beside her, but she could barely see them through the press of bodies.
Brooke was oblivious to everything as she moved with the flow of the crowd. The bright lights blurred as she spun her head from side to side. Her vision swam, the room was spinning. Maybe she'd drunk too much earlier.
She'd never felt better. She felt alive.
The music pulsed, the crowd writhed, and Brooke danced.

The three men entered the warehouse.
The other patrons couldn’t help but notice the newcomers, and all who saw them couldn’t help but stare, particularly at their leader.
The three separated, filing through the sweat-filmed dancers as they attempted to find the one they sought. Arantay wrinkled his nose, using heightened senses to find her. As expected it was mainly humans inside, however some moonlight races secretly moved amongst them. The whiff of werewolf lingered in the air, kitsune too.
Finally, Arantay laid eyes on their target.